The history concerning the window situated behind the Vicar's stall in the choir at St Michael & All Angels, Hughenden.

Sir William Norris Young Bt. and Sir Charles John Young Bt. were brothers. The Baronetcy that they inherited was created in 1769, named "Young of North Dean" and all the eldest sons have been given the first name "William." The Young family owned North Dean House until 1874. 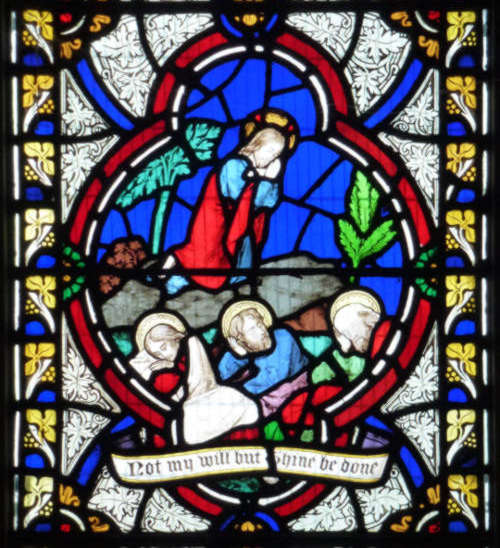 The two brothers we are concerned with were the sons of Sir William Lawrence Young Bt., the 4th Baronet and Lady Caroline Norris. Sir William Lawrence Young Bt. was born on the 29th September 1806. Lady Caroline Young was born Caroline Norris in Hughenden House, in about 1810. Her father was John Norris [1774-1845] and her mother was Louisa Norris [1780-1842]. Hughenden House was then owned by the Norris family, who, when John Norris died, sold it to Benjamin Disraeli, with whom they were acquainted since the Disraeli family home had been at Bradenham Manor, for £35,000. John and Louisa Norris were married on the 27th March 1832. She died on the 15th February 1871, at the age of 61 years, in Kensington, London.

Of their children, three were sons: the eldest became Sir William Norris Young Bt., the 5th Baronet. His is the first name on the windows. He was born on the 15th January 1833 at Hughenden House. He married Florence Clark. He was then aged 21 years; she was 26 years of age.

The marriage took place on the 10th March 1854, at Egg Buckland in Devon and was solemnised by the Reverend Peter Holmes. The Clark family lived at Efford Manor.

Just over six months after his marriage to Florence Clark, Sir William was killed on the 20th September 1854 at The Alma in the Crimea. He was 21 years of age. He was a Lieutenant, serving with the XXIIIrd Regiment [The Royal Welch Fusiliers]. He died during the assault upon the Great Redoubt, the main Russian position, where they had mounted a number of heavy guns at the key point of their position. The XXIIIrd was in the forefront of the attack. They were blasted and beaten back with heavy losses. The Redoubt was taken by the second wave of attack by the Scots Guards. He was buried on the battlefield with his brother officers. After the battle the casualties were collected and buried. The first seven bodies were buried in a communal grave which was later covered by a large marble catafalque, which was inscribed on one side recording this, commending their souls to GOD. On the other side were the names of those buried there, starting with the XXIIIrd's Commanding Officer and then by Sir William Norris Young Bt. 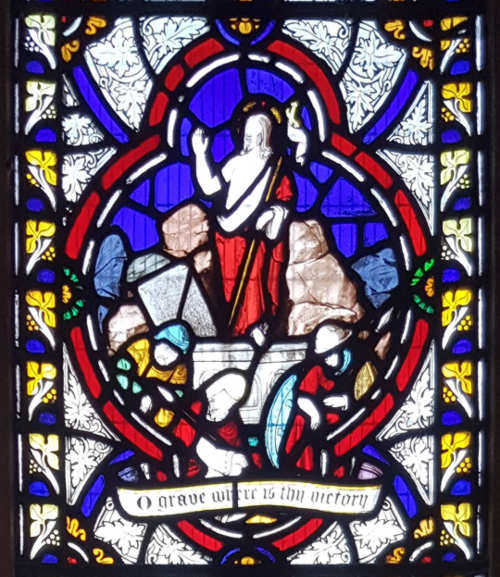 He was succeeded by his next and younger brother, Sir George John Young Bt., as 6th Baronet. His is the second name on the windows. Sir George was born on the 1st March 1835. He succeeded his brother on the latter's death. He survived him for just over one month. On the 22nd October 1854, at the age of 19 years, Sir George died of cholera at Balaklava, before Sebastopol. He was serving with the Royal Regiment of Artillery.

To complete the family history, the title passed to the third and youngest son, Sir Charles Lawrence Young Bt., as 7th Baronet. He was born in Marlow Place, on the 31st October 1839. He married Mary Florence Toulmin and they had three children, two of whom were sons: William Lawrence [1864-1921] and Charles Alban [1865-1944]. Sir Charles died on the 12th September 1887 at Hatfield Priory, Chelmsford. He was 47 years of age.

The Baronetcy passed once again to a brother, this time to Sir William's younger brother, Sir Charles Alban Young Bt., 9th Baronet. He was born in Kensington in 1865. He became the 9th Baronet. He married Frances Clara Elliot in 1908, when he was 43 years of age. They had two children, one of whom was a son: Captain William Elliot Young. Captain Young was born in Athens in 1910.

Sir Charles became Envoy Extraordinary and Minister Plenipotentiary to the Kingdom of the Serbs, Croats and Slovenes. He died in 1944, in Oxford, at the age of 79 years.

Sadly, his son did not become the 10th Baronet. Captain William Elliot Young predeceased his father. He was killed in action in Libya on the 27th May 1942, during World War Two, at the age of 32 years. The title passed to Sir Charles' grandson, a boy then of some 3 years of age. The 10th Baronet is Sir William Neil Young Bt. He was born on the 22nd January 1941. He is married and has a son, William Lawrence Elliot Young, born on the 26th May 1970 and a grandson.